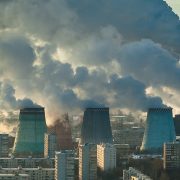 In our rapidly warming world, finding a cheap way to pull greenhouse gasesfrom the atmosphere while satisfying our energy needs could be the key to our continued survival on Earth in the centuries to come.

And new research has brought us one step closer by developing a rechargeable battery that runs on solutions of carbon dioxide and air.

In the past, resesrchers have used greenhouse gas emissions to create an energy source by converting CO2 directly into a fuel such as ethanol, skipping the need for plants to do the dirty work.

A different kind of proposal was made last year by a team at the Lawrence Livermore National Laboratory, which suggested pumping emissions into wells 1 or 2 kilometres (3,000 to 5,000 feet) underground, forcing heated water to the surface to provide a source of geothermal power.

But what if we could use carbon dioxide in the production of batteries directly? Researchers have explored this possibility in the past, but most plans for generating electricity from our glut of atmospheric CO2 are prohibitively expensive, or don’t produce much of a current.

Based on a type of battery called a flow cell, the construct is in principle quite simple.

Imagine two containers divided by a semi-porous membrane. Using a process called sparging, gas from ambient air is dissolved in water and added to one of the containers.

The second container holds a similarly sparged mix of water and pure carbon dioxide. When dissolved, the carbon dioxide splits into positively charged hydrogen ions – or plain old protons – and bicarbonate, bringing the pH of the solution down to 7.7.

Since the air-sparged solution has a higher pH of 9.4, the mixtures form a gradient in different concentrations of charged particles.

Most of the molecules can’t flow across the partition, but the ions move freely from one solution to the other. As a result, the manganese oxide electrodes in each container experience differences in voltage, which in turn produces a current.

Once exhausted, the cell can be recharged simply by switching the solution flowing over each electrode. The researchers found they could swap the solutions back and forth more than 50 times and still maintain the same level of performance.

On average, the flow cell produced a power density of 0.82 W/m2 – nearly 200 times higher than previous efforts. And the materials they used were also comparatively cheaper.

We should point out that about a watt per square metre isn’t huge – something as small as your average AA battery can produce roughly the same amount of power.

And while better results have been achieved using other mixtures, it’s a promising proof-of-concept, and the researchers expect that further tweaks should produce yields large enough to make it worth the cost of construction.

Adapting the technology to make use of the soup of gases produced by burning fossil fuels would be another obstacle to overcome. Right now, the solutions rely on pure carbon dioxide and relatively clean air.

But given the reductions in costs and improvements in power, technology like this provides the stepping stones we need to potentially tackle climate change while still feeding our growing need for power.

This research was published in Environmental Science & Technology Letters.