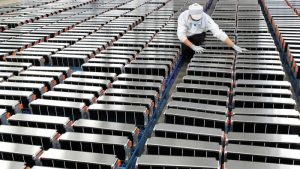 Please use the sharing tools found via the share button at the top or side of articles. Copying articles to share with others is a breach of FT.com T&Cs and Copyright Policy. Email [email protected] to buy additional rights. Subscribers may share up to 10 or 20 articles per month using the gift article service. More information can be found here.
https://www.ft.com/content/5ff0aaa5-a501-42a5-85f4-76537cd6c990

The London Metal Exchange has launched a new contract for battery metal lithium, setting up a transatlantic battle with US rival CME Group, as exchanges look to capture rapid growth in demand for commodities tied to the electric car industry. The LME said the lithium contract was “designed to bridge” the need for battery and car manufacturers to hedge their exposure to volatile lithium prices, and the growing interest from investors seeking exposure to the rapidly growing sector. The move comes after the CME launched a similar contract in May for the battery metal. The two exchanges also compete in cobalt, another key battery metal. Demand for lithium is set to grow sevenfold by 2030 as sales of electric vehicles increase, according to consultancy Benchmark Mineral Intelligence. Prices for lithium hydroxide in China, the world’s largest electric car market, have surged 86 per cent this year. All electric cars use lithium-ion batteries, which rely on the metal to store energy. Lithium hydroxide is the compound favoured by many battery producers and carmakers such as Tesla because it allows the use of more powerful nickel-based batteries. Many lithium miners were initially hostile to the LME’s plan, since a futures contract would standardise a product that is produced to different qualities and grades. But the LME said it had spent three years working with the lithium industry on the launch of the cash-settled futures contract. The exchange’s lithium committee includes members from Albemarle, the world’s largest lithium producer, as well as carmakers including Tesla. “The launch of the lithium hydroxide cash-settled futures contract represents a significant milestone not only for the LME but also for the global lithium industry,” said Ron Mitchell, sales director at Tianqi Lithium, a Chinese lithium producer.

Please use the sharing tools found via the share button at the top or side of articles. Copying articles to share with others is a breach of FT.com T&Cs and Copyright Policy. Email [email protected] to buy additional rights. Subscribers may share up to 10 or 20 articles per month using the gift article service. More information can be found here.
https://www.ft.com/content/5ff0aaa5-a501-42a5-85f4-76537cd6c990

“The contract offers the industry an important price risk management tool and comes at a critical time to support the future electrification goals of many nations.” Most lithium supply deals between carmakers and miners are long-term deals based on assessments by pricing agencies. For car companies a futures contract will provide greater visibility on prices into the future, enabling them to hedge their exposure. That is especially critical in a rising price environment. “One of the most commonly asked questions in lithium is where the prices will go tomorrow,” Martim Facada, a battery raw materials broker at SCB Group, said. “Having a forward curve helps to solve that issue and enables you to better predict, better control costs and better hedge.” The LME and CME contracts are identical in that they are both based on prices for lithium hydroxide in China, Japan and South Korea, produced by Fastmarkets. Last year CME launched a new contract for cobalt, which now trades out to December 2023 into the future and has gained some traction with traders. The LME said the lithium launch was part of a broader sustainability agenda that included new contracts for recycled metals and the ability for producers to add a carbon footprint to their metals on the exchange. The LME said on Monday it had also launched a scrap aluminium contract focused on the US used beverage can market.