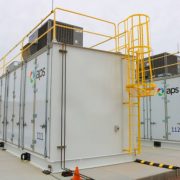 Another lithium-ion battery has exploded, this time at an energy-storage complex in the U.S.

At least 21 fires had already occurred at battery projects in South Korea, according to BloombergNEF. But this latest one, erupting on Friday at a facility owned by a Pinnacle West Capital Corp. utility in Surprise, Arizona, marked the first time it has happened in America since batteries took off globally.

Local regulators are now demanding answers, companies are investigating the cause, and analysts are wondering: Could more blazes threaten the future of lithium-ion — the only technology that has proven capable of bringing battery storage into the mainstream?

“If these fires continue to occur, it doesn’t bode well for the industry in the short term and the storage market will almost certainly slow down,” said Ravi Manghani, an analyst at Wood Mackenzie Power & Renewables. “As other technologies mature and costs fall, it would certainly erode lithium-ion’s advantage.”

Here’s the issue for lithium-ion: while not inherently dangerous, when handled incorrectly, a potential hazard can occur. The electrolytes used today are flammable in the presence of oxygen, said James Frith, a London-based analyst at BNEF. While batteries are sealed from external sources of oxygen, some cathodes can release oxygen within the cell under high temperatures.

The explosions are coming at an inopportune time for the industry. Nothing has done more to fuel the global battery boom than the plunge in lithium-ion prices. Costs have fallen to a level at which batteries can compete against conventional power plants, and everyone from solar developers to utilities to homeowners are buying them to shore up intermittent renewable energy supplies. Pinnacle West’s Arizona Public Service alone has a goal of adding 850 megawatts of storage by 2025 — enough to light up more than 600,000 homes at once.

But that goal was set before Friday’s blast. On Tuesday, Arizona Public Service told the state’s utility regulators that it had shut two other battery systems following the explosion, which injured at least four firefighters. While APS hasn’t determined the cause of the accident, spokeswoman Jill Hanks said it probably involved some sort of “equipment failure.” The system being investigated was installed by Fluence, a joint venture of AES Corp. and Siemens.

The company still plans to charge ahead with its battery deployment plans, APS President Jeff Guldner told the Arizona Corporation Commission during the hearing on Tuesday.

Commissioners peppered APS officials at the meeting with questions about the fire-suppression system at the site and asked whether similar incidents have occurred. Jacob Tetlow, vice president of the company’s transmission and distribution operations, noted that there was once a battery failure at a substation in 2012.

Commissioner Sandra Kennedy called for a “thorough investigation” to ensure the protection of residents and businesses in the area.

In Korea, defective battery models, external shock during construction and faulty battery-management systems may have contributed to recent fires at factories, according to Logan Goldie-Scot, a San Francisco-based storage analyst at BNEF.

The blazes at battery plants are hitting just as smaller, lithium-ion batteries used in electric cars are also coming under scrutiny. This week, Tesla Inc. said it was looking into a sedan that caught fire on video in China.

It’s become a potential selling point for rivals of lithium-ion. Tom Stepien, chief executive officer of Primus Power Corp., a battery company that uses a technology known as flow, was quick to note lithium-ion’s “inherent fire risks” after Friday’s accident. It’s for that very reason, he said, that people are warned at airports not to carry such batteries onto planes.

There is a “wide opening — a pantheon of new technologies that are aiming to beat lithium-ion from both a performance and cost perspective,” said Jeff Chamberlain, CEO of Volta Energy Technologies, an Exelon Corp.-backed company that evaluates and tests new energy-storage applications.

Lithium-ion will be a powerful incumbent to beat. The technology has made up more than 85 percent of the world’s annual energy-storage deployments since 2016, according to BloombergNEF. And other battery technologies carry their own potential hazards.

Just before the fire broke out in Arizona, a coalition of battery makers, installers and utilities announced a task force to establish a set of safety best practices for the industry.

“The U.S. energy storage market nearly doubled in 2018 and is expected to double again in 2019,” Energy Storage Association Chief Executive Officer Kelly Speakes-Backman said in a statement about the task force. “This marks an ideal time for the industry to demonstrate their commitment to corporate responsibility.”