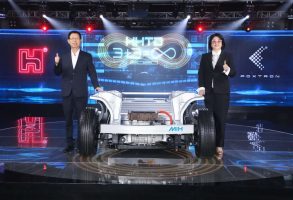 Hon Hai Precision Industry Co (鴻海精密) is to develop an electric vehicle (EV) with Fisker Inc, as part of the electronics manufacturer’s efforts to boost its automotive capabilities at a time when technology companies including its main customer, Apple Inc, are looking to expand into vehicles.

The vehicle would be targeted at multiple markets, including North America, Europe, China and India, and sold under the Fisker brand, the firms said in a statement on Wednesday.

Production is set to start in the fourth quarter of 2023.

Californai-based Fisker is looking to break new ground with its second planned model. The start-up plans to make a vehicle that does not fit into an existing segment, like a sedan or SUV.

Its partnership with Hon Hai is pinned on hopes that the collaboration would bring innovative manufacturing.

“We still talk about adopting the Toyota manufacturing system,” he said, referring to a production and logistics concept that was developed decades ago.

Fisker plans to design and market the vehicle, while Hon Hai would supply the chassis, and manage supply chain and assembly.

That is asking a lot of a firm that has never built vehicles in large volume before.

“I have full confidence that they can do this and maybe have ideas that are outside the box,” Fisker said of Hon Hai.

Shares of Fisker rose 39 percent to a record US$22.58 at the close in New York. Hon Hai shares advanced as much as 5 percent in Taipei.

This month, Hon Hai chairman Young Liu (劉揚偉) said that two light vehicles based on the platform would be unveiled in the fourth quarter.

The firm is also planning to help launch an electric bus, he said.

Hon Hai is expected to build more than 250,000 vehicles annually for the Fisker partnership, the statement said.

The manufacturer might choose to make some of them in the US, a person familiar with the matter said.

Following Wednesday’s memorandum of understanding, the two sides said that they would enter a formal agreement in the second quarter.

Fisker is the second battery-powered vehicle venture founded by its namesake founder, a longtime vehicle designer. Its debut model, the Ocean electric SUV, is scheduled to start production late next year.