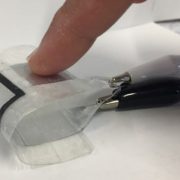 Queen’s University Belfast scientists have designed a new flexible organic battery that could revolutionise how medical implants are powered.

Devices such as pacemakers are currently fitted with rigid metal based batteries, which can cause discomfort.

The charge in the batteries is set to last three times as long as in their conventional counterparts.

As it is decomposable, the organic battery is also expected to have environmental benefits.

She said the “flexible supercapacitor” could be used to power body sensors such as pacemakers.

“In medical devices such as pacemakers and defibrillators there are two implants, one which is fitted in the heart and another which holds the metal based, rigid batteries – this is implanted under the skin,” said Dr Srinivasan.

“The implant under the skin is wired to the device and can cause patients discomfort as it is rubs against the skin.

“For this reason batteries need to be compatible to the human body and ideally we would like them to be flexible so that they can adapt to body shapes.”

Dr Srinivasan said the new battery would be safer than the batteries currently in use.

“It avoids using flammable solvents, therefore you don’t have the hazard of explosion,” she said.

The technology could also have a non medical application in foldable phones or laptops of the future, the designs of which are currently constrained by rigid batteries.

“If the battery goes flexible the whole electronics and equipment can go flexible, it’s interesting and exciting.”

While current batteries contain toxic materials that are complicated to recycle, organic batteries would simply decompose over time.

The new device would be manufactured with organic composites using “natural feedstock” (biomaterials such as cellulose) rather than expensive metals or semiconductors.

But there is no danger of the organic batteries decomposing in the human body as they only start to break down at temperatures above 270C.

With the right funding in place, Dr Srinivasan said the devices could easily be commercialised – so that it could be powering phones or similar devices within the next five years.

A lithium battery that operates at -70 degrees Celsius, a record low
Scroll to top