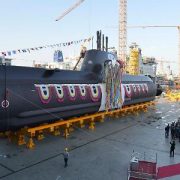 An advanced kit of lithium-ion fuel cells that have emerged as a new source of energy for electric vehicles and other modern devices may replace lead batteries to supply power to new 3,000-ton attack submarines being developed by South Korea with independent technologies.

The Defense Acquisition Program, a state agency controlled by the defense ministry, said it would hold a conference for design review on the compatibility of lithium-ion batteries for the second batch of three KSS-3 submarines that would be built for two years from 2025. If adopted, it would be the first use of such batteries for South Korean subs.

South Korea led by Samsung SDI and LG Chem is one of the world’s largest producer of lithium-ion batteries which are far efficient than lead acid batteries widely used for conventional military equipment. Germany and other countries are developing lithium-ion for their subs.

South Korea has a three-phased KSS project to develop a fleet of attack submarines. Through the first phase, nine 1,200-ton Chang Bo-go class diesel-electric submarines have been built under license. The second phase calls for the construction of six 214 hybrid diesel-electric/fuel cell vessels with air-independent propulsion (AIP).

Through the third phase, nine 3,000-ton submarines will be built with indigenous technologies. The first batch of three KSS-3 subs using lead batteries will be ready for service by 2025.

Construction of the first KSS-3 submarine began in November 2014. Since the class is still at an early stage of development, there have been sporadic calls for a change in design.

The development of advanced home-made attack submarines has gained attention in South Korea because of North Korea’s submarine-launched ballistic missile (SLBM) program. The South’s navy once proposed nuclear-powered vessels, but the idea was contentious because the acquisition of such subs could raise concerns in Washington.

In February, North Korea launched a new intermediate-range ballistic missile, demonstrating its improved missile capability. The missile with an improved solid fuel engine capable of carrying a nuclear warhead more accurately was based on technology used for an SLBM launched in August last year.

The North’s SLBM program has been a prime security concern in Seoul and Washington, though US experts believe Pyongyang is still years away from the operational deployment of a submarine carrying ballistic missile for wartime missions.